There is no crying in baseball

I was raised with my mother’s family, the O’Briens, an Irish Catholic brood in the era of the Kennedys. Like many Irish Catholic families, the Kennedys were demi-gods to us. I’m not sure whether we strove to emulate them or they were just bigger-then life examples of who we already were.

My mother was one of seven brothers and sisters, all attractive, fun loving and full of “vigor” with razor sharp wits.  There was always a crowd of people at Sunday dinner, all laughing and having a good time.  Everyone loved the O’Briens, we were such a happy group.  The dining room table was the gathering place were the quick wits were honed.  Everyone had the gift of sniffing out weakness and woe to the person who let theirs show.  The comments were swift, cutting and very funny.  Even the hapless target laughed.  It was the only way to survive.

Weakness of any sort was not tolerated.  Age or gender didn’t matter.  Everyone was expected to suck it up.  I remember being a small child, maybe three or four, and crying about something.  I immediately became fair game. “Oh look at those crocodile tears.”  “Who do you think you are, Shirley Temple?” “What a little actress.”  And then they would laugh and rough-house with me.  The crying would stop and the feeling be buried.

As I grew and something would upset me I was told, “Ah stop your whinging.  There’s worse in the world then you.”  When my father died when I was nine, I was instructed “Not to cry.  You need to be strong for your mother.”  (I was nine, for Christ sake!)  They even sent me to school the next day, as if nothing had happened.  When my fourth grade class came to the funeral home to pay their respects, I stood at the head of the casket, stoic and erect like a good little soldier, as they knelt in twos on the kneeler and said a prayer.  My whole family bragged about how proud they were of me for being so strong.

By the time I was in high school, I understood certain feelings were acceptable and others were not.  Unfortunately, teen-agers experience a whole spectrum of emotions.  The effort involved in burying the unacceptable ones was overwhelming.  By Junior year, I was showing signs of depression.  My family doctor suggested counseling.  When I told my mother, her response to me was “What have I ever done to you!” followed by a sock in the jaw.  I dropped the idea of counseling.

In my twenties, I developed a lot of self-destructive behaviors.  Although I was bright, funny and attractive, my self-esteem was non-existant.  I did not trust my feelings.  I knew I wasn’t supposed to have many of them.  The constant, internal battle to force them down was exhausting.

I met a man who was much older than me.  He told me I was wonderful and that he loved me more than anything.  He wanted to marry me.  My feelings told me no but my whole family said that he loved me very much and was so good to me.   I knew my own feelings were often so wrong; I was always feeling things I shouldn’t.  I was too worn out to fight, so I married him.  I spent the next seventeen years being told that I was incapable of knowing what I want; that I was disaster; that all my thoughts and ideas were crazy.  I learned to keep it all to myself, showing again only what was acceptable.  I became an expert at feeling what I was told to feel.

When he died, I was lost.  I was on my own, no husband, no O’Briens to tell me what was the right way to be.  I struggled with depression again.  I went to counseling.  I was told I had PTSD.  I thought I was losing my mind. I still didn’t know what was “the right way” to feel.  Many people reached out to me, offered help.  I accepted what I could but only if it allowed me to still seem tough, able to handle anything. I took a workshop to deal with my grief.  One of the exercises was to draw a graph explaining all of the things in you life that were bad, sad or hurtful.  I stood before the group, facing my graph, pointing out mine and when I looked up, there was a room full of tear-stained faces looking back.  I broke down.  I hadn’t realized that anyone might find my own life worth crying about.

That was almost fourteen years ago.  I have remarried – a wonderful man who loves me for who I am, whether weak or strong; who does not deny my feelings or tell me they are crazy.  I am approaching my sixth decade and have finally learned that what I feel is neither right or wrong – it just is.  I have the right to feel differently than others do about the same thing.  I can be sad.  I can be weak.  And I can let others see that weakness in me without believing I will be destroyed.  I still bristle when someone says “Don’t feel that way”, but even that will lessen over time.  I can accept sympathy and support without feeling ashamed.

The image of a calm Jackie Kennedy standing stone-faced as her husband’s body rolls past in no longer my ideal.  Besides, we all know now that, in order to keep it together,  she was a tranquilized zombie.  Oh, and there is crying in baseball. 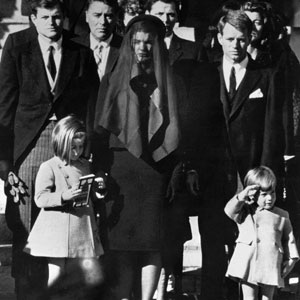 2 Responses to There is no crying in baseball