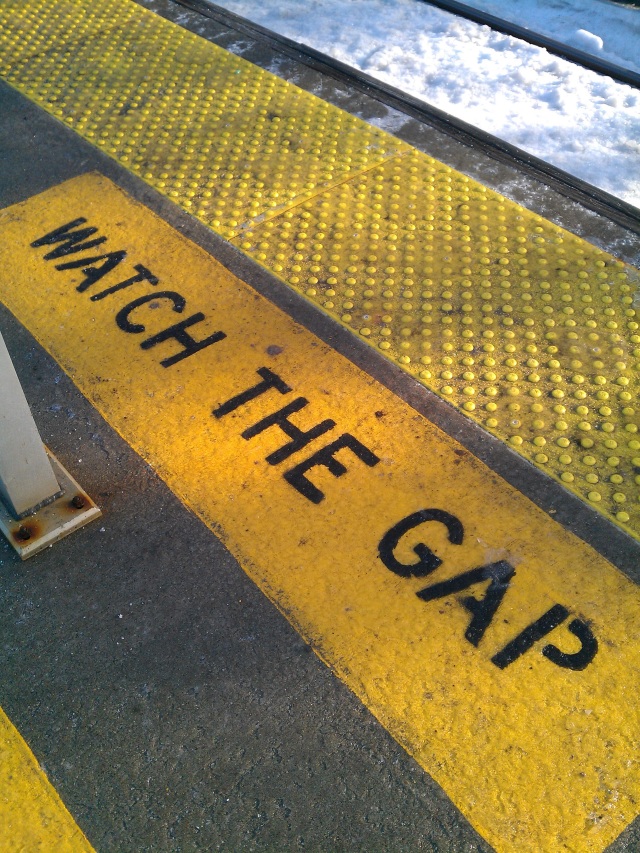 This is my spot. It’s where I stand every morning, five days a week. It’s right where the second door of the first car of the train opens. You better not be standing there when I walk down the platform. I will give you “The Stare of Death”.

We daily commuters are a peculiar group. We become very possessive about certain things. LIKE WHERE WE STAND ON THE PLATFORM. We sit in the same car, usually in the same seat (though there is a little flexibility there, as long as it is the same general area). But don’t take my window seat!

We see the same people day after day, year after year. Sometimes we actually get to know one or two of them. They become “train friends” as in “Honey, I saw your train friend at the store.” But mostly they are just familiar faces who you never get to know. So you give them secret nick-names.  My husband and I used to commute together and over the years we had “Flower Pot Hat Lady”, “Ax Murderer”, “Plane Lady” (She had a plane.  We would overhear her talk about it.) “Crackberry Man” (He never took his eyes off his Blackberry.), “The Sentinel” and plain old “Psycho Guy” (You couldn’t touch him. Seriously. He got into a fist fight with someone who bumped into him.We didn’t see him after that.) Makes you want to ride the train, huh.

It takes awhile before a new rider becomes a regular.  It’s like moving into an old New England town, twenty years later and you’re still “that new fella”.  But once you are, you are allowed certain rights and privileges.  Like your own spot on the platform or the right to “SSSHHHH” people who are speaking above a whisper on the morning train.  And of course, you have a secret nick-name.

I’ve always wondered what my secret nick-name is.  I never take my coat off, even when the heat is blasting.  So maybe I’m the “Coat Lady”.  I sit with my ear buds and IPad and scroll through FaceBook and web sites and watch video clips. And many times I read or watch something that has big, fat tears rolling down my cheeks.  So maybe I’m the “Crying Lady”.  Other times something will strike me funny and I start to giggle.  So maybe I’m the “Bi-Polar Lady”.  Or, taking all that into consideration, maybe I’m just the “Crazy Lady”.

Now and then you stop seeing someone.  You wonder if they are alright.  Are they sick?  Did they change jobs or get fired?  Did they move?  Did they retire?  It bothers you if you see another person sitting in their seat or standing in their spot.  After all, you’d want the regulars to have your back if you were out for awhile.  Eventually, if they don’t come back, the hierarchy shifts, and a regular with a worse spot or seat, takes over theirs.  It’s the Law of the Commuter Jungle.

I’ve been making this commute for about 10 years now.  I was grandfathered in as a regular because my husband did it for 25 years before he changed jobs.  I’ve probably got another 5 or so years to ride the rails.  And then, one day, my spot on the platform will be empty.  And the word will go around, “Has anyone seen the ‘Crazy Coat Lady’?”  And after a reasonable, respectful amount of time, there will be a new person standing at the end of the Purdys station sign, by the “Watch The Gap” warning, right where the second door of the first car opens.  And so it goes.