The Art of Gratefulness – Day 5

This morning I left the house a little earlier so I could vote.  We have a hotly contested race for First Selectman here in my little piece of Connecticut.  There was a time not too long ago when I could have cared less.  The Democratic process in this country was a mess as far as I was concerned.  What difference did it make who was in office.  It was all a bunch of crap anyway.

When I was younger (much younger) I was a part of the protest generation.  We took our politics very seriously.  We could organize a protest at the drop of a bandana.  I even helped put together a “pray-in” in our school chapel to protest the threatened expulsion of a classmate.  (Hey, it was a girl’s parochial school.  You have to fight ’em on their own turf.)  I campaigned for candidates.  I was proud to vote in the first Presidential Election after the voting age was lowered.  I believed we could change everything.

That’s youth – you believe in your own power to do anything.  Eventually, like it was for many my age, disillusionment set in.  I stuck my head in the sand and said “Screw you.  I’m out of this.”  But recently, I’ve come to see that is what much of the problem is with politics in this country.  Too many of the thoughtful, fair, even-handed people have sat on the sidelines for too long and let the stubborn loudmouths take charge.

S0 today I am thankful that I have the right, the duty to  make my voice heard.  I may never again sit cross-legged on the floor singing “We Shall Overcome” , but I will never take for granted my freedom to vote for what I believe in. 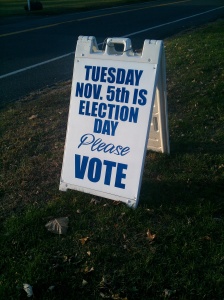 This entry was posted in Daily Life, Gratitude, Uncategorized. Bookmark the permalink.

My life in addiction recovery with a traumatic brain injury