Lions and Tigers and Bears

Well last weekend, my husband’s wish finally came true – we saw a bear. The area around our house is highly wooded,  yet in the twenty-plus years he has lived here, never once has he even caught a glimpse of one. But on Saturday, we had a full-blown sighting, up-close and personal.

I find it rather unsettling that our ursine friend waited to show up until I put out into the Universe (also know as the Internet) my own feelings about bear sightings.  I guess everyone’s online these days.

I did have a sign of what was to come earlier in the day . We had driven to the Danbury Mall. (I abhor malls but that is where the Apple Store is.) It had been some time since we had been there so we were wandering around the second level when we came upon the Build-A -Bear Store. Now plain old stuffed bears don’t bother me, 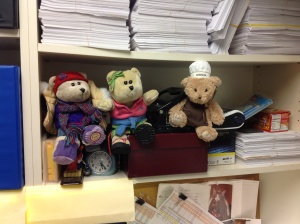 The Bears in my office

and neither does the one in front of our local junk (excuse me, antique) dealer (this is Connecticut you know)

but in front of the store was a sales associate (or partner or team member or whatever they call them now) hawking their newest treat – the One Dimension Dancing Bear. Oh it was a lovely thing for children – like Chucky with fur.  I had the sense the thing was taunting me with it’s little zombie dance but a new Mac Book Pro was waiting so we moved on.

After we bought our new Apple toy, we high-tailed it out of the Great American Wasteland and headed back home.  It was one of those glorious August days you sometimes get in Connecticut so we took the dogs out back, opened the patio umbrella, and settled in with some adult beverages to enjoy nature and the sounds of the seventies emanating from the outdoor speakers.

We had only been relaxing a few minutes when Maggie began chuffing.  We never pay any attention to her when she does that because anything from a blowing leaf to the neighbor’s tractor can get her going.  Then I noticed that my husband was looking behind me.  “Is that a bear?”  I knew he had read my blog about mutant bears and thought he was just busting my chops so I ignored him.  “Seriously, is that a bear?”  I turned around and behind me, up on the bank, not 25 feet from us was a 350 pound black bear.

By now we were on our feet and the dogs were going nuts.  All I could think was “Holy shit. Holy shit!” We had to get the dogs into the house.  Gilligan was too old to jump the wall anymore but get Maggie worked up and give her a running start and she turns into Carl Lewis.  Well I was chasing Maggie and my husband was chasing Gilligan and we were all running in circles and the bear just sat there and watched.  Somehow we herded the both of them inside and shut the door.  The bear, in the meantime, had turned back though the woods the way he had come.  After running to the edge of our hill and yelling down to our neighbors that we just had a bear by us and to be on the lookout, my husband took off into the trees behind the barn.  “Where are you going!”   “I’m going to look for the bear.  It was cool.  I want to see it again.”

He wants to see it again! Was he crazy?  A bear? A wild bear? A 350 pound wild bear? I followed him a little ways to make sure he was OK and not Yogi’s picnic basket.  To be honest, it was cool and a little part of me wanted to see it again too.  Then, in my head, I heard the voice of the newscaster on the 10 o’clock news – Tragedy today in the small town of Bridgewater – and decided one of us need to survive to take care of the dogs.  Slowly, I picked my way through our woods back to the house.  I froze at every little sound, positive that at any moment I would be charged by a pissed-off bear.  When I got back to the gate, I waited for my husband to come back.  After a few minutes, I heard something moving through trees behind the barn.  “Please let this be my husband”, I thought, “and please let him not have his arms torn off.”  Finally I caught sight of my sweaty, all-in-one-piece, out of breath husband.  “I lost him”, he gasped.   “He must have taken off pretty quickly.  Damn! I really wanted to see him again.”

Actually, I have to admit, that although it was nerve wracking, seeing a bear was also pretty exciting.  So now, every time the dogs go crazy barking at anything,  we run to see if it’s a bear.  Mostly it’s just chipmunks.

This entry was posted in Uncategorized. Bookmark the permalink.